Taiwanese have a long history of using traditional Chinese medicines. Following contemporary medical technology developments, systems of TCM administration gradually evolved in different areas. These include raw materials, pharmaceutical quality control, development of new drugs, the Taiwan Herbal Pharmacopeia, and professional abilities of practitioners. The vision is to achieve high-quality TCM and services for the public.

The quality control management of TCM materials has been implemented in a three-stage plan starting in 1999. The first stage was to promote the package labeling of TCM materials. The label should include the product name, weight, manufacturer’s name and address, date of manufacture, expiration date (or shelf life), batch number, category, production region (country), storage method and use instructions. The second stage focused on setting and amending the abnormal substances limits for TCM materials. These abnormal substances include heavy metals, aflatoxins, sulfur dioxide, and pesticide residue, as stipulated by reference to the several nations’ regulations for the safety of TCM materials. The goal of the third stage was to complete the source management mechanism for TCM materials. This stage was focused on the inspection of imported TCM materials (Figure 3-1). Starting August 1, 2012, “The Inspection and Examination of Imported TCM Materials” started to be implemented on 10 TCM materials with large import quantities, such as jujube, etc. Starting January 1, 2017, 21 TCM materials are required to follow this regulation requiring import inspection and examination.

Figure 3-1: The 3 Stages of Quality Control Management for TCM Materials 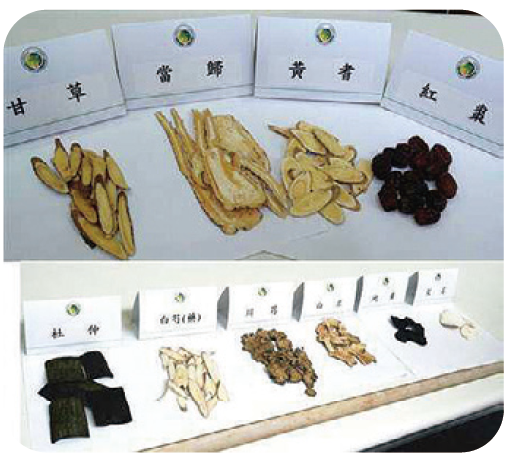 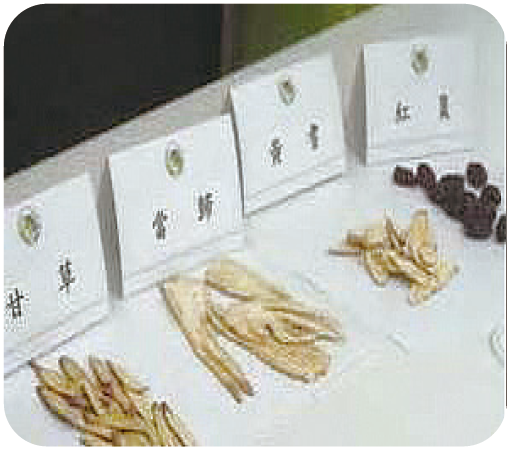 Since 26 October, 2006, TCM preparations are required to to be submitted to heavy metal or other abnormal substances examination. Later, starting 1 July, 2013, standard limits were set for abnormal substances in all TCM concentrated products. According to “The Standard Limits for Toxic Substances for TCM Preparations” announced on 26 October, 2006, standard limitations on heavy metals for 5 kinds of single ingredient products, Liquorice Root, Gypsum, Fossilia Ossis Mastodi, Ginseng Root and Myrrh were established. In addition, “The Standard Limits of Abnormal Substances and Scope of Application” for 22 kinds of TCM formula products, such as “Tian Wang Buxin Dan”, was established on 26 December, 2013. Starting 1 July, 2014, these 22 traditional product items must meet the standard limits for total heavy metals as well as individual limitations for lead, cadmium, mercury and arsenic.

Since 1970, our country requires that all TCM preparations must be licensed. The Central Authority of Health Administration undertakes a complete auditing system that includes pharmaceutical factory inspection, review of documentation, and field inspection. The licenses will be granted after the professional standards have been met. As of 2019, 91 GMP certified TCM pharmaceutical factories in Taiwan and 22,547 TCM preparation licenses have been granted. Half of these licenses are for physicians’ prescriptions, 8,200 licenses are for selling over the counter (OTC) medicine, thus facilitating public purchases from pharmacies. A few licenses are for export (Table 3-1, 3-2). This system is consistent with Western medicine administration.

On July 31, 2017, the “Regulations for Registration of Medicinal Products” was revised, providing TCM preparations specifications and testing methods with all necessary items and contents. In order to ensure the effectiveness and safety of TCM preparations, MOHW announced the “Standards for Stability Testing of Chinese Medicine” on May 29, 2018. The standards became effective on January 1, 2019. On October 7, 2019, “Regulations for Registration of Medicinal Products” Article 74 and Article 77-1 were revised, to enable each TCM pharmaceutical factory to maintain consistent standards for the inspection specifications of TCM preparations that have been included in the latest edition of the Taiwan Herbal Pharmacopoeia or the Chinese Pharmacopoeia.

Note: With reference to Article 8 of the"Pharmaceutical Affairs Act": "The term"preparations" shall refer to drugs which are processed and compounded from raw materialsinto a specific pharmaceutical form and dosage. Preparations are classified into medicines tobe prescribed by physicians, medicines designated by physicians, pharmacists and/or assistantpharmacists, over-the-counter drugs, and preparations of inherited formulation."

When people research ancient well known medical records, it is common to see the same TCM formula name, but its prescription, ingredients and dosage are different. The same components with a different name can also be noted. Although the TCM industry is used to this situation, general consumers are unable to reconcile these discrepancies. Also, due to this situation, it is difficult to standardize TCM quality. The Ministry, industry and academia, have together studied and established basic standard formulae (prescriptions) in order to foster TCM development and to increase the quality of TCM. The Ministry has announced 100 basic standard prescriptions, such as "Liu Wei Di Huang Wan" on 31 August, 1995. Later, the Ministry announced a further 100 basic standard prescriptions including "Sheng Yu Tang" on 29 June, 2000. Again, the Ministry announced a further 22 basic Chinese medicinal liquor standard prescriptions on 4 January, 2001. The industry should follow these prescriptions in order to assure and improve the standards and quality of medicine.

To promote TCM pharmaceutical factories catch up with international norms in terms of medicine quality management, while promoting their implementation of validation, on September 20, 2018 the MOHW announced the launch of “Standards of Chinese Medicine Good Manufacturing Validation Procedures” along with its schedule for actual implementation. With approval from the MOHW, the standard will be implemented for Chinese medicine factories producing concentrated preparations starting January 1, 2020. This implementation will occur over four stages. 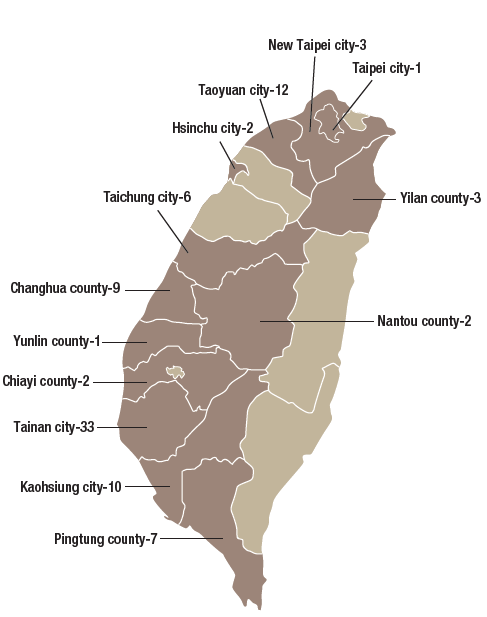 The Ministry strongly encourages and supports measures to create a suitable environment for developing TCM-based new drugs. Owing to the uniqueness of TCM, the Ministry encourages cooperative research and development from the industry, government and academia, and promotes biotechnology. The Ministry also keeps the industry updated by responding to international regulation updates as stipulated in the “Guidelines on Examination and Registration for New Chinese Medicines”, which were announced October 20, 1999. It helps the industry follow the correct process, when applying for licenses for TCM-based new drugs.

Since 1999, the Ministry has accepted 24 new domestic research applications for new investigational drugs (IND). "LipoCol Forte" and "Chemo Young Oral Solution" were granted new drug licenses after completing the new process based on the most up-to-date international drug investigation guidelines.

Dealing with the issue of new drug licensing has shown that the biotechnology industry has the ability to research new TCM drugs, and has also indicated that TCM quality can be inspected according to contemporary scientific methods. 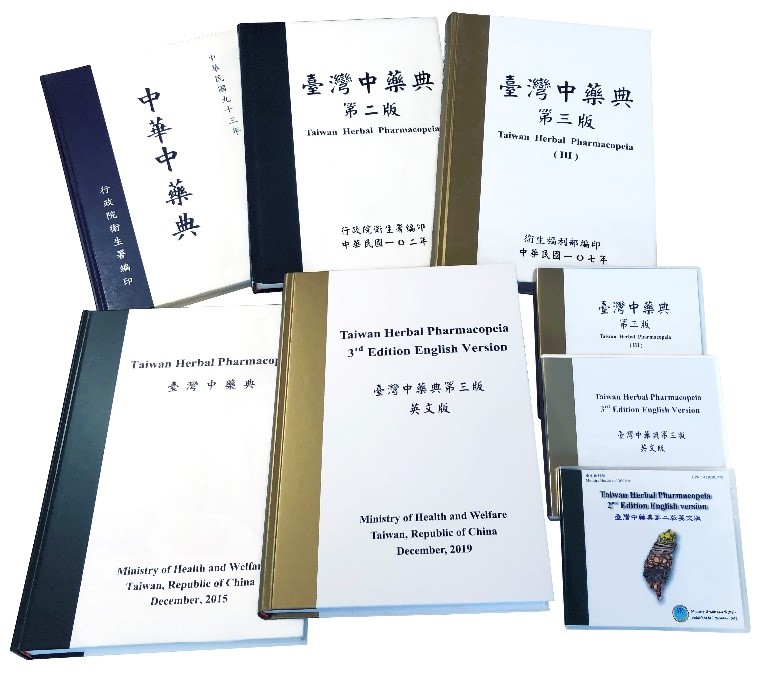 The third edition of the Taiwan Herbal Pharmacopeia was published in November 2018 and officially implemented on June 1 2019, incorporating 55 new TCM material items and 2 TCM concentration preparations, bringing the total to 357 items. This book features a collection of TCM materials that can be found in Taiwan, and adopted new developments in green chemistry analytical methods. After validation experiments, they will be incorporated into future revisions of Taiwan Herbal Pharmacopeia, where scientific, systematic methods are applied to enhance quality control and regulations of TCM materials. The English version of the third edition of the Taiwan Herbal Pharmacopeia was published in December 2019, thereby fostering the internationalization of Taiwan’s TCM, as well as facilitating developments in the TCM industry. Further, both the pharmacopeia and illustrations were provided online with the launch of the Taiwan Herbal Pharmacopoeia and Illustration Online Database (www.cmthp.mohw.gov.tw) (Figure 3-9). The contents of the second and third editions and pictures of Chinese medicine materials are offered, along with graphic and textual reference comparison data, which makes the pharmacopeia convenient to query and use through the Internet.

"Color Illustrations of Chinese Materia Medica" was published in 2009 to coordinate with the compilation of the "Taiwan Herbal Pharmacopeia". The publication, which served as a complete illustrated reference, consisted of a collection of 250 TCMs, including original animal/plant forms, original medical properties, shapes, and traits. "Color Illustrations of Taiwan Herbal Pharmacopeia" was published in 2013, in order to synchronize with updates to the content of Taiwan Herbal Pharmacopeia. It contained 300 items of Chinese medicine materials (figure 3-10). The illustrations offer a reference for the public. Further, the publication increases the ability of TCM practitioners and the public to identify TCM materials, thus reducing the possibility of TCM materials misuse. 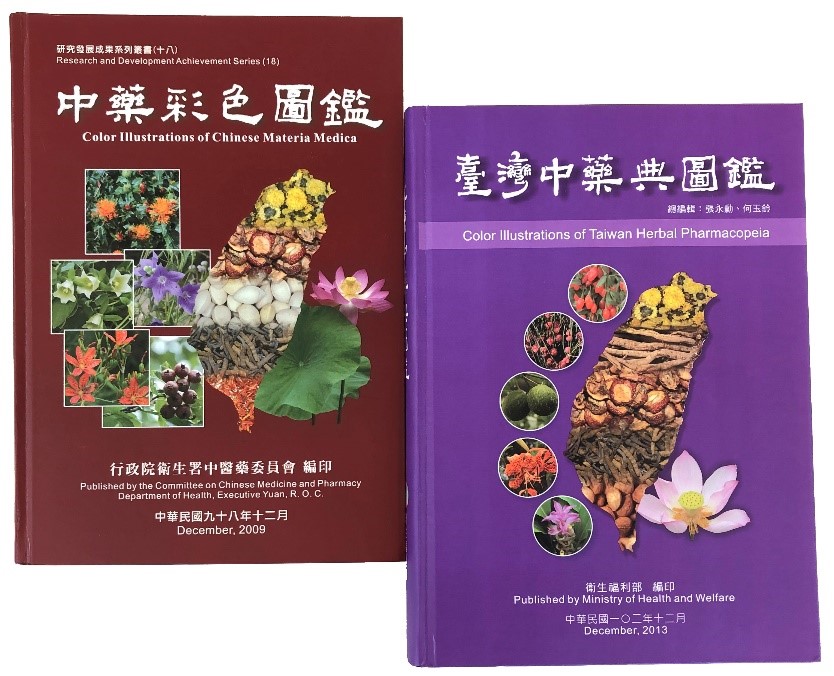 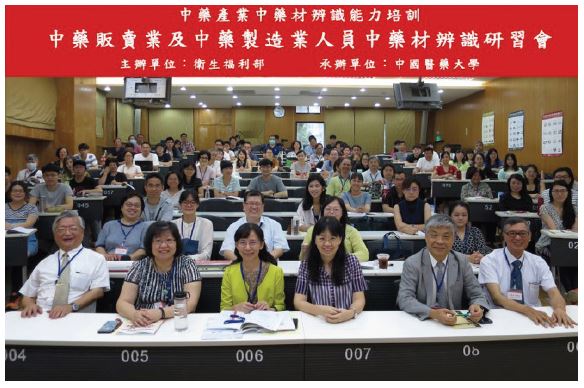 The implementation of National Health Insurance (NHI) in Taiwan was designed to cover both TCM and Western medicine. The public often takes Western medicines and TCM simultaneously, and the interactions between the two are receiving increasing attention among health communities. Since 1999, the Ministry has advocated studies of the interactions between Western medicine and TCM, in order to ensure the safety of medication for the public. A drug-herb interaction database was set up in 2014, and general surveys of drug-herb interactions as well as relevant studies and investigations in clinical practice have been conducted. The database will help the public understand and manage avoidable risks and ensure clinical benefits regarding the timing and concurrent use of Western medicines and TCM. Scientific data for the toxicity and effect of Western medicine and TCM interactions can be obtained through evidence-based medicine, scientific theory, and case analysis. 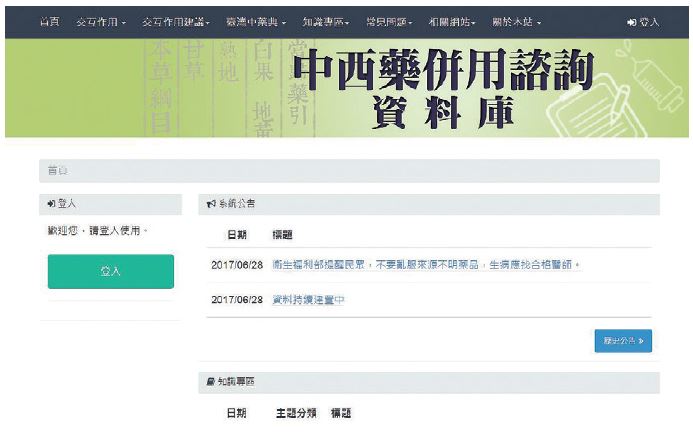 The Drug-Herb Interaction Database was officially posted online in 2017 (Figure 3-12), boasting a collection of 3,085 entries on drug-herb interaction research: 2,846 entries on drug-herb polypharmacy and pairing, and 475 entries on TCM literature and TCM incompatibility. The system is connected to the Taiwan Herbal Pharmacopeia Online Database and TCM License Inquiry System, to providing access for both clinicians and researchers. Moreover, it has been integrated with the Food and Drug Administration of the MOHW to form the"Drug Information Database" (https://mcp.fda.gov.tw/) (Figure 3-13). The platform's interface has been refined by augmenting separate search interfaces for the general public and medical professionals in order to cater to the specialized needs of different groups. 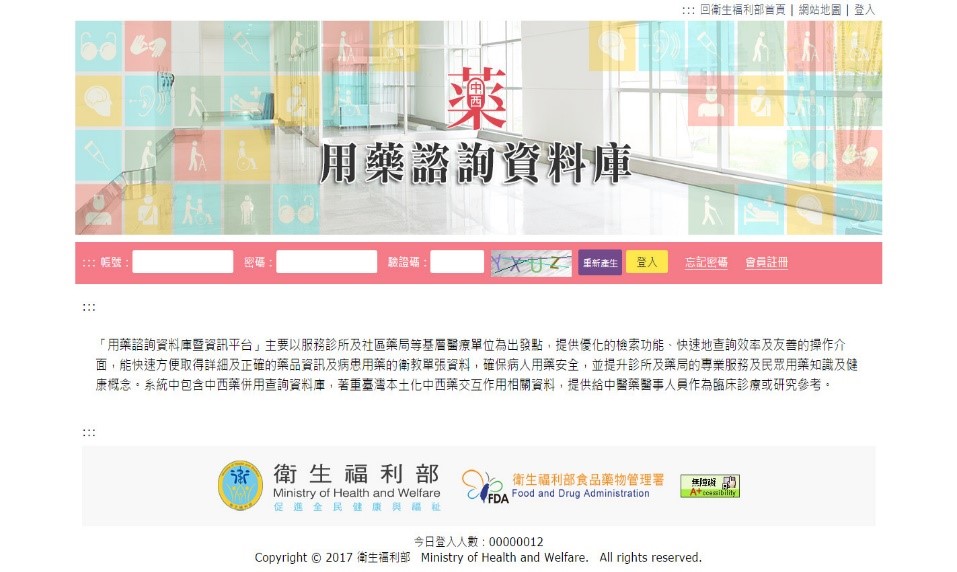 To improve TCM safety for the public, in 2001 the Ministry set up a reporting system for TCM adverse drug reactions. By the end of 2019, more than 2,474 cases of adverse drug reactions to TCM had been reported. A TCM risk management mechanism was established by a professional investigative team that carried out analysis assessments on related information. The integration of a reporting mechanism for adverse reactions to Western medicine and TCM was achieved in 2016 (Figure 3-14). This mechanism will allow healthcare facilities and healthcare practitioners to speed up the reporting process, as well as make the process more convenient. It should also improve information dissemination and health education. 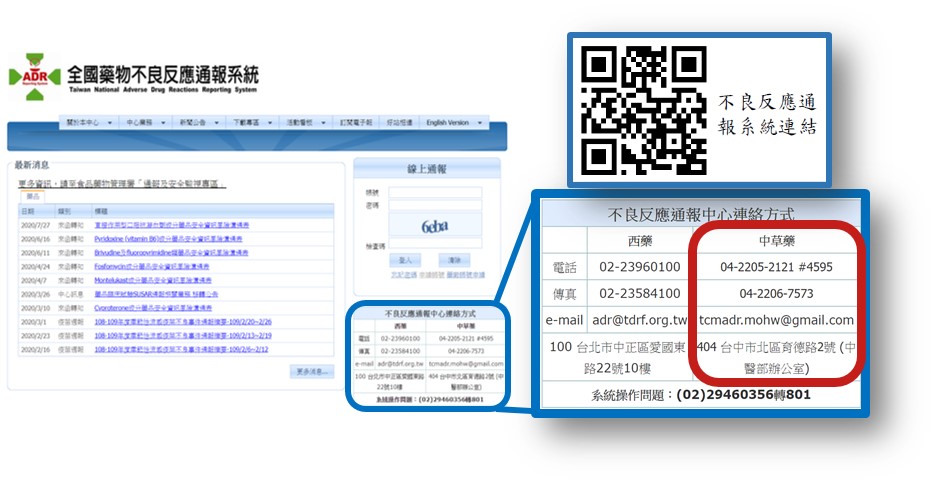 In order to enhance public awareness of TCM-related health education and build up concepts of correct TCM usage in daily life, in recent years the Ministry has engaged in the promotion of TCM health education. The five core abilities for correct usage of TCM are"Withdraw, See, Listen, Select, and Obey"which sums up the five key tips for correct TCM usage:"Withdraw improper medicines, See Chinese medicine physicians, Listen to recommendations, Select safety, and Obey TCM instructions correctly."We combined the strengths of TCM health education resource centers, TCM medical institutions, community primary clinics, and pharmacies to organize a series of health education and advocacy activities in settings such as communities, school campuses, and workplaces. We also produced various health education brochures, posters (Figures 3-15), and animation videos to convey messages via seminars and multi-media interaction, which will spread and disseminate the knowledge on TCM and raise TCM awareness and concepts in the general public. 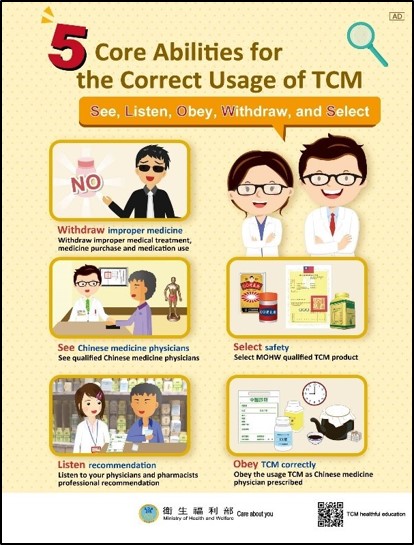 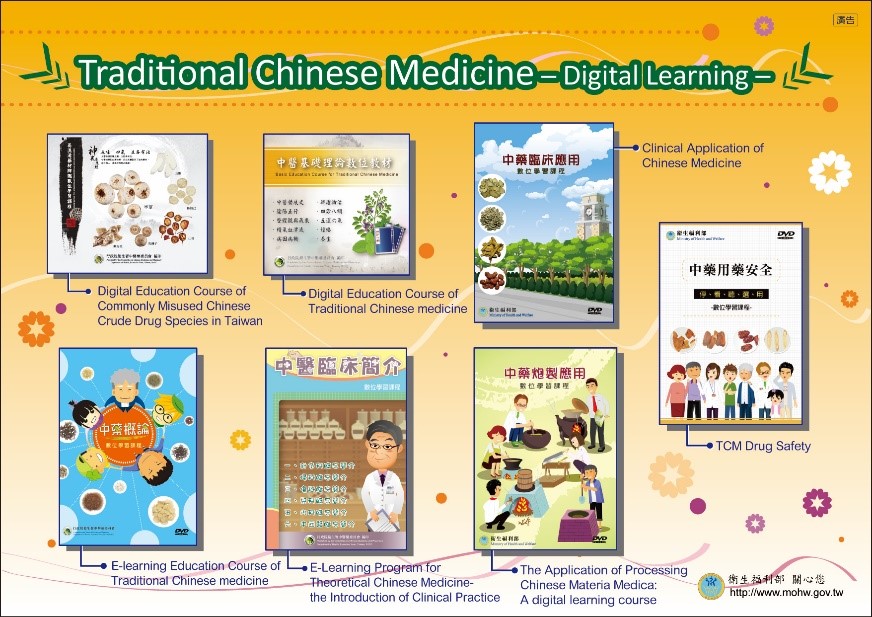