The Duty of Administrative Organization

The administrative system for Traditional Chinese Medicine Management changed several times as the government system was reformed from the first year of the Republic of China (1911) until now. The TCM Committee was set up under the Department of Health within the Ministry of the Interior after the government relocated to Taiwan. This committee provided advice and recommendations to health authorities regarding the development of TCM. The Department of Health was transferred from under the Ministry of Interior to the Executive Yuan in 1971. The TCM Committee has remained since its establishment by the Executive Yuan. TCM management services grew rapidly due to strong worldwide demand for TCM. The Committee of Chinese Medicine and Pharmacy was officially established by the Executive Yuan on November 1, 1995. This institution is not only an administrative service, but is also a critical point in TCM development history. The Committee includes four services teams: Chinese medicine, Chinese pharmacy, research and development, information resources and records. It is also responsible for TCM administration and services promotion.

Section Two: Organization of the Ministry of Health and Welfare (MOHW) 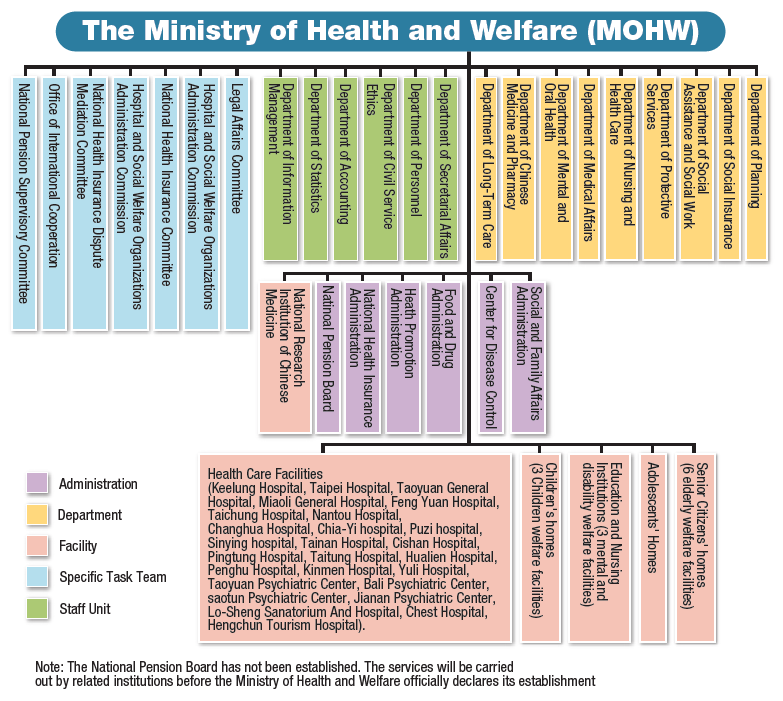 Section Three: The Duty of the Department of Chinese Medicine and Pharmacy in MOHW 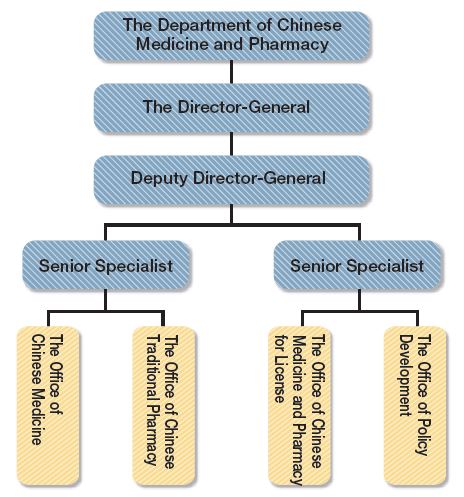 Figure 1-2: Organization Structure for the Department of Chinese Medicine and Pharmacy

II.Functions of the Department of Chinese Medicine in the Ministry of Health and Welfare:

The World Health Organization's (WHO) Traditional Medicine Strategy 2014-2023 calls for nations to place emphasis on traditional medicine and develop management legislatures, as well as construct a robust regulations system and promote traditional medicine's contribution to health for all. Paragraph 5 of Article 10 of the Additional Articles of the Constitution of the R.O.C. (Taiwan) also stipulated that: "The State shall promote universal health insurance and promote the research and development of both modern and traditional medicines." To fulfill the duties entrusted to it by the Constitution, and to draft unique legislation that both encapsulates Taiwan's TCM characteristics and keeps in line with international trends, the Ministry has endeavored since 2017 to carry out pre-planning and research for the legislation of the Chinese Medicine and Pharmacy Development Act. The act was submitted for review by the Executive Yuan on October 18, 2019 and was approved during the 3,676th Executive Yuan Sittings on November 14 of the same year. The act was then submitted for review by the Legislative Yuan, and through the concerted efforts of majority and minority political parties, the act was approved on December 6 of the same year and promulgated by the President on December 31 (Figure 1-3).

The enactment of this legislation symbolized a new milestone in the development history of Taiwan's Traditional Chinese Medicine and laid the principal foundation for the nation's TCM development, as well as establishing the basis of administrative and financial support. It is hoped that the formulation of this act will enhance the sustainable development of TCM and pharmacy for the purpose of improving the health and well-being of all. Measures to achieve these goals involve: planning and promotion of TCM development projects, implementation of TCM healthcare services, promotion of Chinese pharmaceutical industry quality and development, co-existence of traditional knowledge and innovative scientific development, enhancement of TCM research and talent development, and the sharing of Taiwan's TCM experiences with the international community. 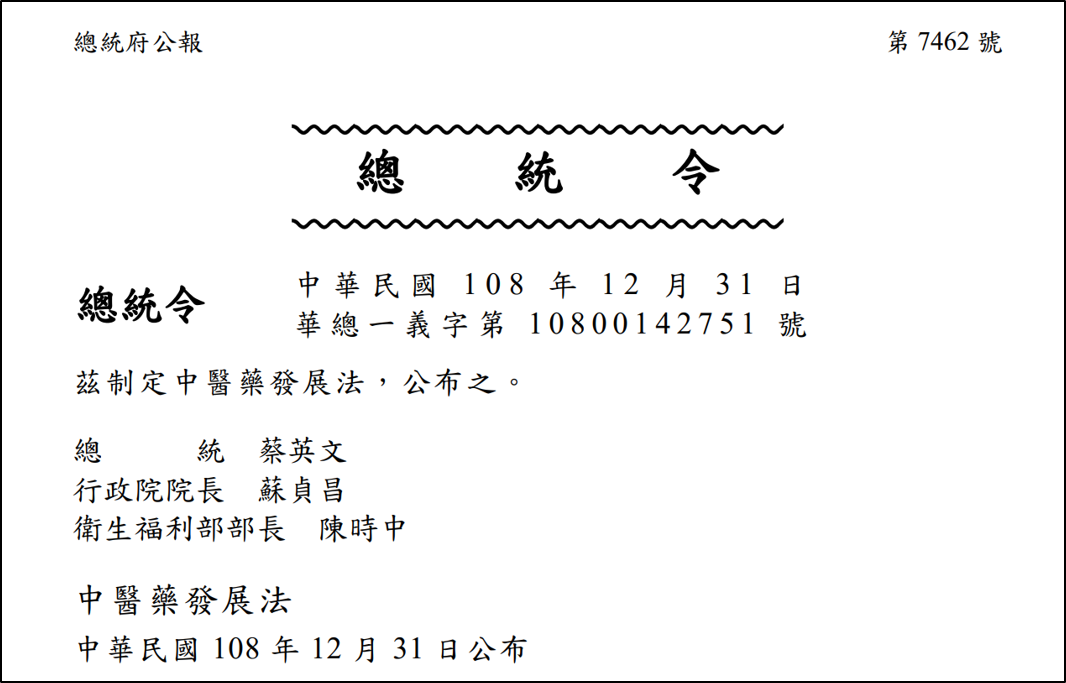 II.The Focus of the Chinese Medicine and Pharmacy Development Act

The Act is comprised of 7 Chapters and 24 Articles. The key principles of the act are as follows:

To promote the sustainable development of TCM, the Ministry is planning a prospective TCM development blueprint in line with the fundamental vision of the Chinese Medicine and Pharmacy Development Act (Figures 1-4). The aim is to perfect TCM healthcare, strengthen TCM industry and quality management, promote research development and talent training, and showcase the unique features of Taiwan's TCM, while exerting influence in the international community for the purpose of health and well-being for all. 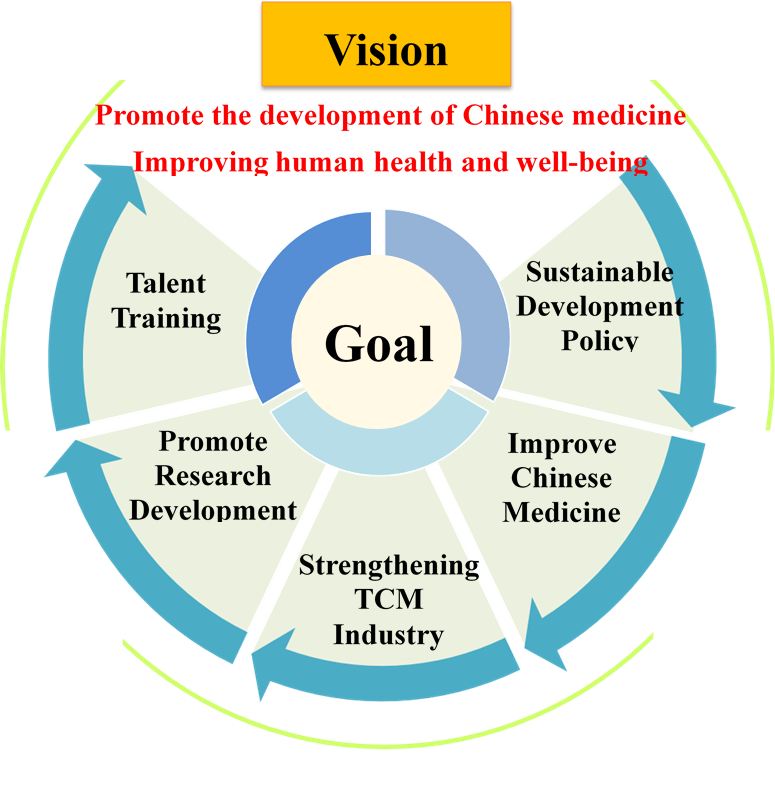 Figure 1-4: The Vision of the Chinese Medicine and Pharmacy Development Act

III.The Effects of the Chinese Medicine and Pharmacy Development Act

In terms of Chinese pharmacy, we plan to encourage the cultivation of TCM medicinal plants in Taiwan. Medicinal plants like red sage root and rhizome, turmeric rhizome and Bletilla formosana (Hayata) Schltr. tuber are already being cultivated in Taiwan. As the harvesting periods of medicinal plants are generally longer, land-leasing guarantees and protection will be provided for the cultivation of TCM medicinal plants on publicly-owned lands, which will reduce the costs and pressures related to contract amendment and land recovery. Additionally, relevant sub-regulations will also be formulated to provide appropriate incentives or subsidies for plant farmers, which will cut down dependence on imported TCM ingredients.

To strengthen management of the quality control of TCM, we referenced domestic and international development trends to revise the Taiwan Herbal Pharmacopeia, amending the limit standards for abnormal substances in TCM ingredients (such as sulfur dioxide, heavy metals, aflatoxins and pesticide residues). For TCM concentrated preparations, we will gradually devise standards for the concentration of marker component, improving quality control of TCM products. In the future, we also plan to devise related regulations to enhance the monitoring of marketed TCM preparation and ingredient, in order to safeguard the use of TCM for the general public.

As the competition for global traditional pharmaceutics becomes fiercer in recent years, we seek to stimulate the development of the TCM industry and establish a comprehensive quality management system for both TCM products and TCM manufacturing environments. The Ministry is also pro-actively promoting the globalization of quality management standards for TCM pharmaceutical factories. Starting from January 1, 2020, TCM pharmaceutical factories will undergo validation in four stages, which will gain the industry increased international recognition.